Rather unexpectedly, the first thing that popped into my head at the DPPrompt for today – shadow – was Edgar Allan Poe’s Eldorado.

You may be one of many that had to memorize it at school or maybe you dimly recall it through shrouds of the distant past.

For the latter, I have no doubt at all that it will take just the first haunting lines will jog your memory: 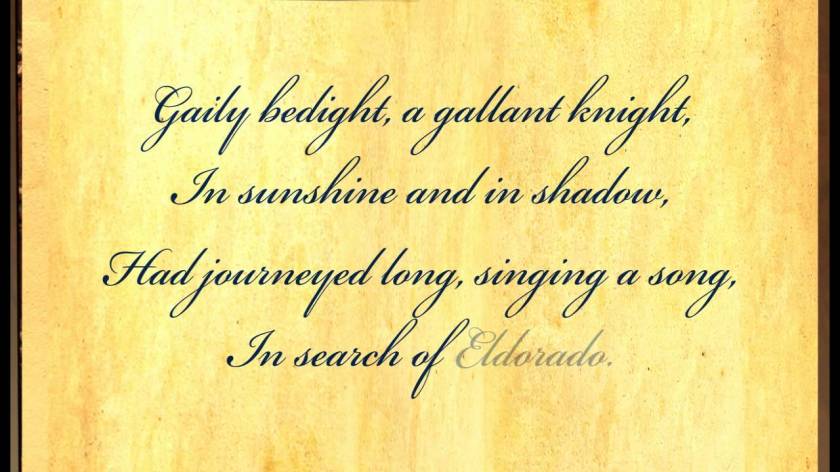 For those who, worse, have never encountered this poem, here it is in all its haunting glory:

Gaily bedight,
A gallant knight,
In sunshine and in shadow,
Had journeyed long,
Singing a song,
In search of Eldorado.

But he grew old—
This knight so bold—
And o’er his heart a shadow
Fell as he found
No spot of ground
That looked like Eldorado.

And, as his strength
Failed him at length,
He met a pilgrim shadow—
“Shadow,” said he,
“Where can it be—
This land of Eldorado?”

“Over the Mountains
Of the Moon,
Down the Valley of the Shadow,
Ride, boldly ride,”
The shade replied—
“If you seek for Eldorado!”

The thing about the Pilgrim Shadow that is most disturbing is that even if you read the poem as a child you recognize him. And as you grow older, he becomes more and more familiar.

Because even in the best of times, those moments when we’re happiest, a “shadow” seems to fall. Sometimes we see it fall across the face of someone we know, when suddenly the laughter fades and a sudden somberness, however brief, appears. Often we feel it in ourselves, in the midst of great joy, a wrinkle in time and mood that straightens itself out eventually, but in the meantime, that unexpected shadow.

Like the knight in the poem, we are all on a pilgrimage through life that eventually ends in death. But is this Pilgrim Shadow merely death? I think not, since he seems to be pointing to a place the knight yearns for, a land of Eldorado, a deep longing captured in the song “Somewhere Over the Rainbow” (which somehow seems to move almost everyone who sings it to tears).

The shadow is a reminder of this universal longing. We all recognize it. But what exactly is it for?

In the haunting rhythm of this knight’s journey, Poe, a Christian, reveals our desire for something unearthly, something outside the realm of this world, somewhere incorruptible where perfection reigns with eternity, and more importantly, the place where One who is the sum of all our desires calls us.

Those moments of shadow remind us we’re still looking, that we’re not there yet, but that we need to keep searching for the way.

So where is Eldorado? It is the place of the divine, the otherworldly, where the God who made us calls us home.

I pray you find your way there.

Hebrews 11: 13-16
These all died in faith, not having received the things promised, but having seen them and greeted them from afar, and having acknowledged that they were strangers and exiles on the earth. For people who speak thus make it clear that they are seeking a homeland. … But as it is, they desire a better country, that is, a heavenly one. Therefore God is not ashamed to be called their God, for he has prepared for them a city.