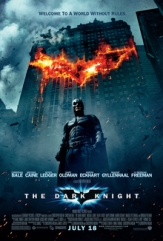 Today SandmanJazz’s 30 Day Film Challenge asks us to disclose our fondest superhero film! Yikes! On the one hand, I think this comic-book-derived genre is so over-hyped and on the other hand, three films come quickly to mind as memorable in their own right apart from the superhero mania: Superman (1978), Tim Burton’s Batman (1989), and The Dark Knight (2008). They range from traditional to gothic to neo-noir and I enjoyed each one.

At the moment, though, I’m going to go with The Dark Knight, directed by Christopher Nolan. It wins the sweeps mostly for its noir shadows, out of which emerge the darkest representation of a nihilistic psychopath this side of hell, Heath Ledger’s Joker.

He just wants to watch the world burn.

The most disturbing revelation in the movie, though, is its suggestion that there is in each of us an ember of this desire waiting for a chance to unleash itself.

That idea is not unfamiliar. Some call it the imp of the perverse, others recognize it as original sin. But to fight it daily within ourselves and in others takes a “superhuman” courage and strength, from a selfless act of kindness to a willingness to forgive, even sacrifice for the sake of others. Characters like Bruce Wayne (Christian Bale), Alfred (Michael Caine), and Lt. Gordon (Gary Oldman) represent our noblest impulses..

But sometimes these acts come from unexpected sources.

When the Joker conducts “a social experiment,” we see the drama between good and evil played out not just in the superhero Batman but the seemingly hardened criminal, the scarred and shackled hulk of an orange-suited convict who refuses to allow his “betters” to blow up a ship full of passengers just to save themselves.

Dark Knight makes us confront hard truths about ourselves as individuals and as a society that few movies, let alone superhero movies, have the ability to do. You gotta hand it to Christopher Nolan. As a storyteller, his narrative works on many levels all at once, not just on a comic book level.

Don't be shy! I'd love to hear your thoughts. Cancel reply